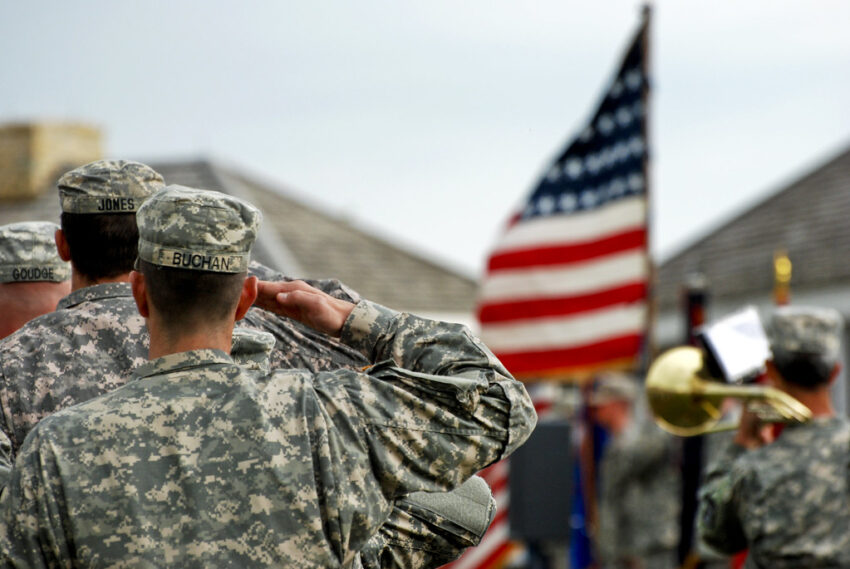 Caution of militarism has been a core tenant of the United States of America and is a tradition that was only discontinued after World War II. The Founding Fathers were concerned with and opposed to a large military presence during peacetime because they saw it a threat to freedom and people’s rights. George Washington stated that an omniscient presence of a growing military establishment during peacetime “hath ever been considered dangerous to the liberties of a country.”[1]

The United States, since its founding colonies, has used its military force to further its expansionist ambitions for its economic, geopolitical, and territorial gains. However, after each war and conflict, Congress made sure to descale the military back to its pre-war or pre-conflict size, over concerns of the threat an immensely powerful military could pose to the nation and its inhabitants. In June 1784, the Congress of the United States of America explained their ruling, stating that “standing armies in time of peace are inconsistent with the principles of republican governments, dangerous to the liberties of a free people, and generally converted into destructive engines for establishing despotism.”[2]

However, a growing concern over public safety led to an increase in military power during World War II, led in part by Roosevelt’s Lend-Lease Act. The events of September 11, 2001 and the government’s subsequent response led to immense public approval for increased military spending and power. According to the Defense Manpower Data Center, the United States has approximately 1.3 million active-duty troops, an additional 865,000 troops in reserve, and approximately 200,000 active troops deployed in more than 170 countries worldwide.[3]

Militarism in the United States has permeated all aspects of American society, from politics and the economy to education and fundamental values. The separation of powers regarding the US military is not clearly defined in the Constitution and has been varyingly interpreted by the government throughout history. In this paper, we will analyze the balance of military powers through the military-university relationship in the Champaign-Urbana community, before expanding to the effects of militarism on society as a whole.

United States military involvement with higher education institutions such as universities and colleges can be traced back to the Morrill Land-Grant Act of 1862, which stated that military training must be included in the curricula of schools that were financed by the sale of federal land.[4] Although the military training was largely irrelevant at first, the impact of World War II created a connection between higher education and the military that is still prevalent in today’s society. During World War II, many of the science and engineering departments at universities were utilized to help research and develop military technologies, as the Department of Defense (DoD) began providing grants to faculty and students at universities as a way to minimize the connection between the government and academia. Since World War II, a majority of the federally funded research in universities continues to come from the DoD and other war-related committees.

The University of Illinois was one of the higher education institutions funded by the Morrill Land-Grant Act, with the condition that military science education would be provided in the curriculum.[5] This relationship has grown significantly, with the University of Illinois System requesting $2.759 billion from the DoD in 2021 to support research projects.[6] These include various research laboratories such as the Advanced Propulsion and Energy Laboratory, as well as other projects involving the Defense Advanced Research Projects Agency. In addition to research funding, the military also closely works with the University to recruit students, through methods such as the Reserve Officers’ Training Corps (ROTC), mass emails, and career fairs. Though this relationship is now transparent and information can readily be found through the internet and other sources, this was not always the case for the military-university relationship.

In response to the growing concern over public safety and pro-war sentiments during World War II, President Roosevelt created the Office of Scientific Research and Development, which endorsed the governmental support of research by university scientists.[7] While initially this was framed as a general interest in scientific research, many universities secretly began developing chemical and biological weapons along with other military technology.[8] Although maintaining secrecy surrounding the research was not illegal, many faculty and students at these universities were strongly opposed to military research, citing that it violated their academic freedom.

The Statement of Principles on Academic Freedom and Tenure, developed in 1940 by the American Association of University Professors provides that “Teachers are entitled to full freedom in research and in the publication of the results.”[9] While the Supreme Court has continuously upheld academic freedom as a right under the First Amendment in cases such as Sweezy v. New Hampshire, which established that university faculty were entitled to their own beliefs and associations, the scope of academic freedom is not clearly defined by law.[10] The uncertainty regarding the rights of universities to permit or forbid military research led to many protests during times of war. In 1970, students at the University of Illinois protested the university’s involvement with the DoD due to anti-Vietnam War sentiments, culminating in the firebombing of campus buildings.[11] In response to the protests and general disapproval, many universities began cutting ties to the DoD and other government-funded institutes, leading to military research shifting towards off-campus facilities in the following years.

In the post-9/11 era, public perception toward the military-university relationship has improved vastly, largely due to the War on Terror campaign by the US government. Many faculty members and students have welcomed the increase in resources coming from grants, scholarships, and other sources of funding. With the government dedicating over $750 billion of its budget towards the DoD and Department of Homeland Security in 2021, this increase in university funding comes as no surprise.[12] While the rise of militarization has many proponents, mostly concerned with the threat of terrorism to American safety, there are those who view it as an attack on political freedoms and disapprove of the growing consolidation of power in the executive branch.

While the US Constitution divides the war powers of the government between the executive and legislative branches, the scope of the president’s military power is not clearly defined, nor does it explain Congress’ influence on military decisions.[13] In 1936, the Supreme Court ruled in United States v. Curtiss-Wright Export Corporation that the president has greater war power with regards to foreign affairs, allowing for the executive branch to respond to military conflicts abroad without the need for congressional authorization.[14] This ruling has led to the justification of many presidential orders involving the commitment of the US military in foreign countries to combat terrorism. As a result, many are wary of the president’s power to involve the military in conflicts without declaring war in the constitutional sense. This has also led to concerns about the rise of globalization and American imperialism, and the implications they may have on the future.

III. The Rise of Otherism: Post 9/11 Impact of Militarism

One of the main issues of our time, and certainly the most important issue to many Muslims in the West, is the depiction of Muslims, Islam, and Arabs as the “Other” and as inherently foreign, dangerous, and uncivilized people in the Western Hemisphere. The dehumanization and political positioning of the conquest of a people as absolutely necessary is what allows for militarization to take place. In 2003, George W. Bush justified the invasion of Iraq as a way to liberate its people, heavily relying on the usage of the phrases “liberating its [Iraqi] civilians” and restoring the “hopes of an oppressed people.”[15] This speech and the news coverage that followed was used as a means to sway public opinion as a way to mold the public opinion in support of war.

Thus far, the dehumanization of people as a primer for wartime and a prerequisite for military action has been inspected through a broad ideological lens. To better understand how this process of otherization of a people takes place, it is important to look at the way these people are portrayed in the media and how their histories are taught in educational settings. The narrative that certain “cultures” are inherently “backward” and thus inferior and should be inevitably conquered by superior cultures is a belief that is repackaged to the American populace through the form of Hollywood entertainment, the way Arab and Muslims are orientalized in national news as herds of tan-skinned individuals with no facial features and tall turbans shouting ‘threatening’ slogans, and how generally, how little information on American invasions and conquests is available to the American public. In congregate, the social and cultural undermining and the dehumanization of the Arab and Muslim people in the Southwest Asian and North African (SWANA) region. This otherization of the subjects, or those occupied by American military forces, is a critical to the American narrative that the invasions of Afghanistan and Iraq and conflicts with Iran, Somalia, and Pakistan are rooted in the quest to restore civility, democracy, and order to that point in the world as if these core values were absent before–when in actuality, before American intervention, many of these countries enjoyed budding democracy and social movements.

The prejudice and beliefs held by the west impacted their study of the Oriental and we still see the ramifications of it; for example, Islam is seen as a “mystic” and “backwards” religion and Arabs are regarded as an “uncivilized” people. Dissecting the concept of Otherism through the lens of postcolonial studies is critical especially in the contemporary moment, as the War on Terror continues with no end in sight and the state-sanctioned violence of Muslims, both domestically and internationally, also persists.

The United States Military is responsible for enormous governmental expenditure but is often excluded from the conversation surrounding budget cuts. While information surrounding the topic is scarce, divesting from the United States Military, in whole or in part, is not a new idea. Krepinevich defines the role of the U.S. military as “U.S. armed forces’ success may be measured by their ability to support U.S. policies and achieve that exceedingly fine balance maintaining sufficient near-term capability to reassure friends while not appearing provocative to potential competitors”.[16] The United States Military is commonly referred to as the largest and best in the world. The cost of this title is undeniable when examining the National Defense Budget, or even propaganda surrounding its continuance. Many find it radical to advocate for the end, or even a significant reduction of the U.S. Military, though Krepinevich begins to analyze this issue by discussing divestment from certain sects of the military as it currently exists. The United States Military, he believes, creates unnecessary risk for Americans by remaining as large as it is, which makes it necessary to call for its restructuring. In his work Krepinevich goes on to say that “Given limited resources, the U.S. military cannot restructure itself to invest in new mission capabilities and retain all existing mission capabilities at their current levels”.[17]

[2] Congress of the United States of America, June 1784, as quoted by Sidney Lens, “The Military-Industrial Complex”, Kansas City, MO: Pilgrim Press and the National Catholic Reporter, 1970, 13.